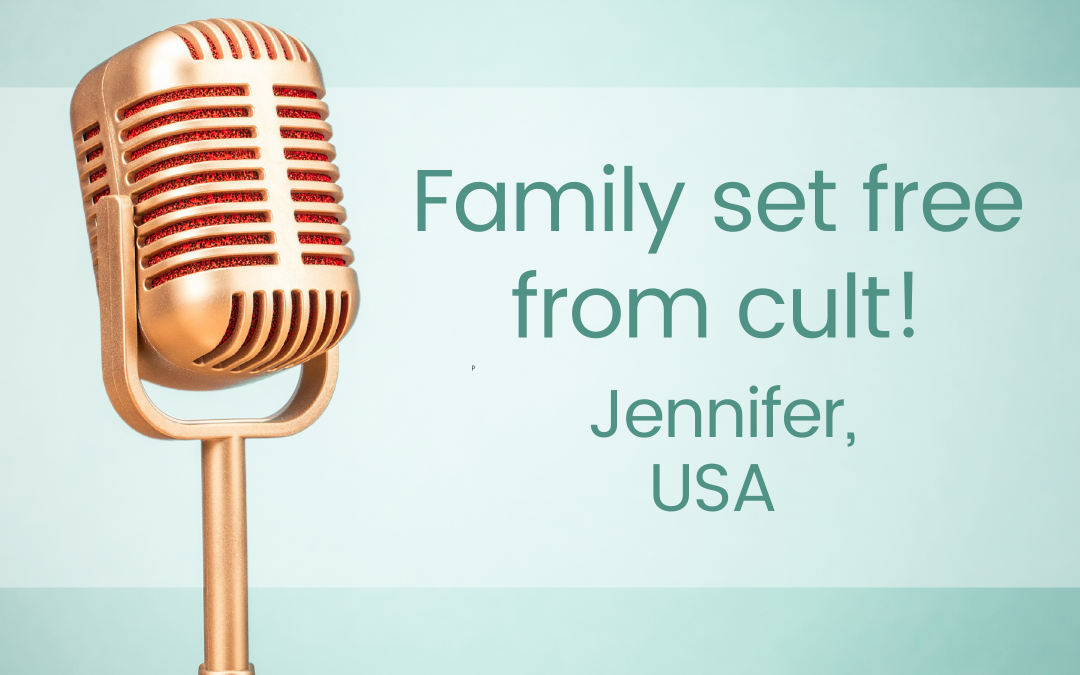 A few days ago, I received this beautiful testimony from “Jennifer”, in the USA, who decided to use the Word of God and her faith to contend for her family, and has now seen them set free!

You will be blessed and encouraged! 🥰

My husband’s sister was one of my closest friends from the time we met. She was the one who invited my husband and me to a Christian church for the first time and that began our journey as Christians. She lived with us for a short time before she married one of my husband’s best friends from childhood. They ended up moving several states away and one day about 15 years ago, they mentioned that they were seeing a life coach. We didn’t really know what that meant but it seemed innocent at the time.

Over the years, our interactions with them grew more strange as they shared the beliefs of the life coach, the book they based their life on, and we saw signs of them pulling away. And then, abruptly, they cut all ties with family and friends they once knew. They admitted they had been hypnotized to forget their childhoods. Their distorted beliefs kept them from contacting us. My sister-in-law that used to be the best aunt and loved children now was brainwashed into not wanting children of her own and not desiring to even be around children for a visit.

The last time we saw them was 7 years ago at her brother’s wedding. We were a little surprised they came, but after that, we only heard from her minimally and it was usually to yell at us about something. She was hostile, angry, and spewing hatred. But, through it all, I knew this was not her. I knew she would eventually be set free. I knew we couldn’t do anything in the flesh but we could pray. I would tell concerned family and friends that our power was in prayer and to separate her actions from the woman we’ve always known. We could not rationalize with her or convince her as it would just anger her and push her further away. We just needed to pray and believe.

It has now been about four years since I had last spoken to her on the phone and it was a hostile conversation. She is often in my thoughts and prayers but for some reason, in April, shortly after I found Emily’s podcast and requested a pdf of Confessions for Life and saw the page to speak over for the Salvation of a Loved one, I felt compelled to take action. I took a screenshot and sent it to her mother, her brother and his wife, and my husband. I didn’t really ask them but told them we were to speak it OUT LOUD over her for 40 days and see what happened. This seemed a bit out of the blue since none of us really had any contact with her in a long time but we all longed to see her free.

The 40 days ended in early June. A few days later my husband received a text from her that they needed to talk. They spoke that evening and while he was on the phone, I called my 12 and 14-year-old boys over and reminded them of what the adults had been speaking over her and I spoke it again out loud in front of them. I told them I didn’t know what was happening on the phone, but I know that God is moving.

After about half an hour my husband called me into the room and handed me the phone. I said hello and braced myself for what was coming because past conversations had been so hate-filled. The first thing she said was, “I hear you’ve had a prayer group for me.” I cringed. The last time we spoke, she accused me of talking about her behind her back and cussed at me and was so angry. I didn’t know how to respond this time to her comment. Her next words were, “Thank you!! We have left the cult. Our eyes have been opened.” She cried and said she wanted to be an aunt again.

I looked at my husband who had tears in his eyes and we spoke with love and forgiveness and encouragement to her and told her that we always believed she would be free, that we were never mad at her and knew this was not her, and welcomed her with open arms. She spoke with my children (my six-year-old spoke to her for the first time ever), and we all rejoiced. It was not only a testimony to her but to us and to my children about the power of God and the power of His Word!

2 Corinthians 4:4 tells us that it’s the god of this world (Satan) that is blinding the eyes of those who don’t believe (or are held in bondage to cults, addictions, ungodly choices, mental illness, destructive emotions) because he is the thief that steals, kills and destroys.

We can’t control people’s choices but we absolutely can deal with the Liar that’s influencing their choices!

And when we use our authority by binding the devil (forbidding him) from lying to and blinding our loved ones, and enforce God’s will by speaking His Word over them, he HAS to flee. (James 4:7)

And when the source of the blindness is dealt with, their eyes will be opened, they will “see” the truth, and they will be free. (Eph. 1:17)

For a PDF copy of Prayers for the Salvation (deliverance) of a Loved One, click here:

For a PDF copy of the Confessions for Life booklet click here: