We Are To Occupy Until He Comes 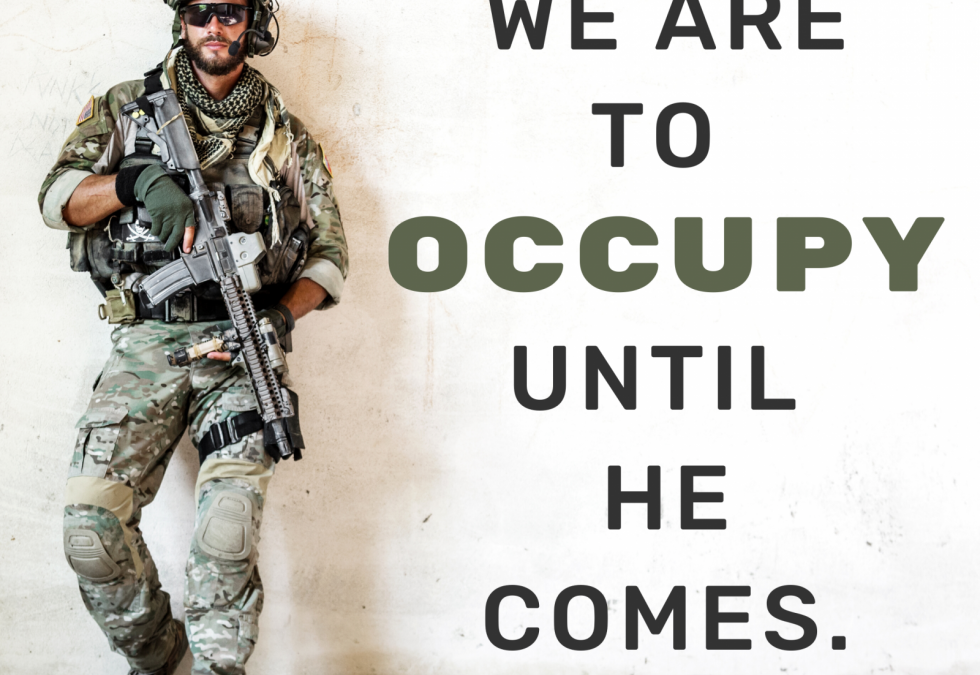 What does it mean to ”occupy” and why would Jesus tell us to do it?🤔

Let’s look at military occupation as an example:

Military occupation takes place when an opposing force is defeated and the conquering army occupies the territory of the defeated foe for a designated length of time.✌🏼

The occupying forces are given temporary control of that territory by the conquering power and delegated authority to execute martial law against all rebels and insurrectionists.💪🏼

The occupying army are responsible for enforcing law and order and maintaining peace and stability for the duration of their occupation.👮🏻‍♂️

Jesus defeated the devil at Calvary and stripped him of all power. The devil is an eternally conquered foe. ✝️

But because of Adam’s sin, the devil is still “god” of this earth until the appointed time. (2 Corinthians 4:4)

The devil is still on the loose in the earth and he still successfully steals, kills and destroys from people who don’t know he’s defeated or ENFORCE his defeat. (John 10:10)👇🏼

That’s why we have to read the “rules of war”  such as Psalm 8:5 and see that God has made us a little lower than Himself (Elohim)! He has crowned us with glory and honour! He has set US over the works of his hands! He has put all things in subjection under OUR feet! 🙌🏼

And that’s why Jesus instructed us (his army!) to OCCUPY this earth – the territory of the defeated foe – until He comes.✌🏼

It is OUR responsibility to enforce the LAW for the duration of our occupation and ensure that peace and stability are maintained.💪🏼

We have delegated authority from the conquering King to execute martial law against all rebels and insurrectionists (disease, destruction, and death) using the artillery of the kingdom of Heaven – the Word of God, the Name of Jesus and the power of the Holy Spirit. 📖☝🏼🕊

When we dig into God’s word and find out our rights and responsibilities as God’s occupying army, we won’t hesitate to exercise our authority in the conquered enemy’s territory and keep him in his place – under our feet!🦶🏼

We will obey orders and OCCUPY this earth until the return of our King! 🙌🏼 #faithtalks

For further teaching on this subject, listen to “You Are The Boss if the Devil: The Believer’s Authority”, Episodes 39-44 of Faith Talks with Emily Preston podcast

For a FREE copy of Confessions For Life – scriptural declarations that cover all the main areas of life, go to www.faithtalks.com.au or email questions@faithtalks.com.au