We Can’t Force People To Turn From Darkness To Light, But We Can Silence The Voices That Are Keeping Them There 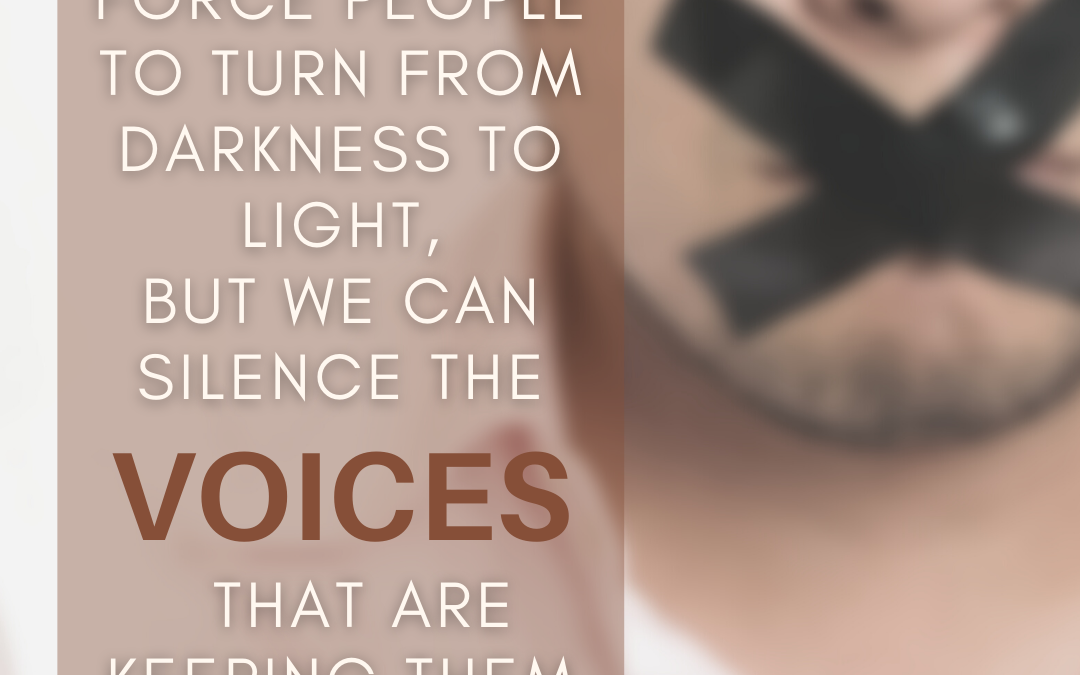 When my mum got saved many years ago, she assumed that all the members of her family would be as excited to receive Jesus as she was. So it came as a shock when her older brother didn’t want to hear anything about Jesus, and any attempt to talk to him about God ended up in arguments and strife.
.
Mum then came across the scripture in Matthew 16:19 – “Whatever you bind on earth will be bound in Heaven…”
.
She decided that she was no longer going to try to do anything in the natural to win her brother to Jesus, but instead she would use her authority to bind the enemy that was deceiving him.
.
Every day she would speak to the enemy and say, “Satan, I bind you in the name of Jesus. I bind your lies, your deception, your unbelief, and your pride. You cannot speak to my brother in Jesus’ name!” and she would visualise the devil under her feet with his mouth gagged.
.
Again, she did nothing in the natural to try to persuade him and she didn’t tell him she was praying for him.
.
But bit by bit changes started to take place.
.
He would say to mum, “You know, my life’s really changing! I feel so different!”
.
And still mum didn’t say anything but continued to consistently bind the enemy from over him.
.
Several months later he called mum and told her that he had been driving to work that day and that the Spirit of God had come into his car. It was so powerful that he had to pull over and he knew at that moment that he either had to go with God or continue on his way which would end in destruction.
.
Right there on the roadside he received Jesus and described how he had “wept buckets of sin”.
.
2 Corinthians 4:4 tells us that, “Satan, the god of this world, has blinded the minds of those who don’t believe so that they CANNOT see the glorious light of the Gospel.” 😈
.
The reason unbelievers are hostile to the Gospel and fall prey to addiction, evil habits, lifestyle choices or behaviour is because SATAN is lying to them, deceiving them, and blinding their eyes to the truth. 😵

We may not be able to force people to turn from darkness to light but we DO have authority over ALL of the power of the enemy (Luke 10:19) and we DO have the authority to bind that demonic influence (Matthew 16:19). 💪🏼
.
To “bind” literally means to “prohibit, forbid, declare as outlawed, tie up” (Strong’s Concordance).⛔️
.
So when we speak directly to the enemy (the source of the blindness) that’s influencing people and “bind” him, we are prohibiting and forbidding him from influencing them. We are declaring him an outlaw and gagging his mouth. 🤐
.
If we are consistent to keep our foot on the enemy and resist him with our words of authority, he HAS TO FLEE. (James 4:7) 👉🏼
.
And then, once the source of the “blindness” is removed, that person’s eyes will be opened and they WILL see the glorious light of the Gospel – the TRUTH that makes them free! 🤩✝️
.
(They don’t even have to know it was because of YOUR prayers!) 😉
.
That’s GOOD NEWS! 🙌🏼🙏🏼 #faithtalks