Your Faith Is Enough! 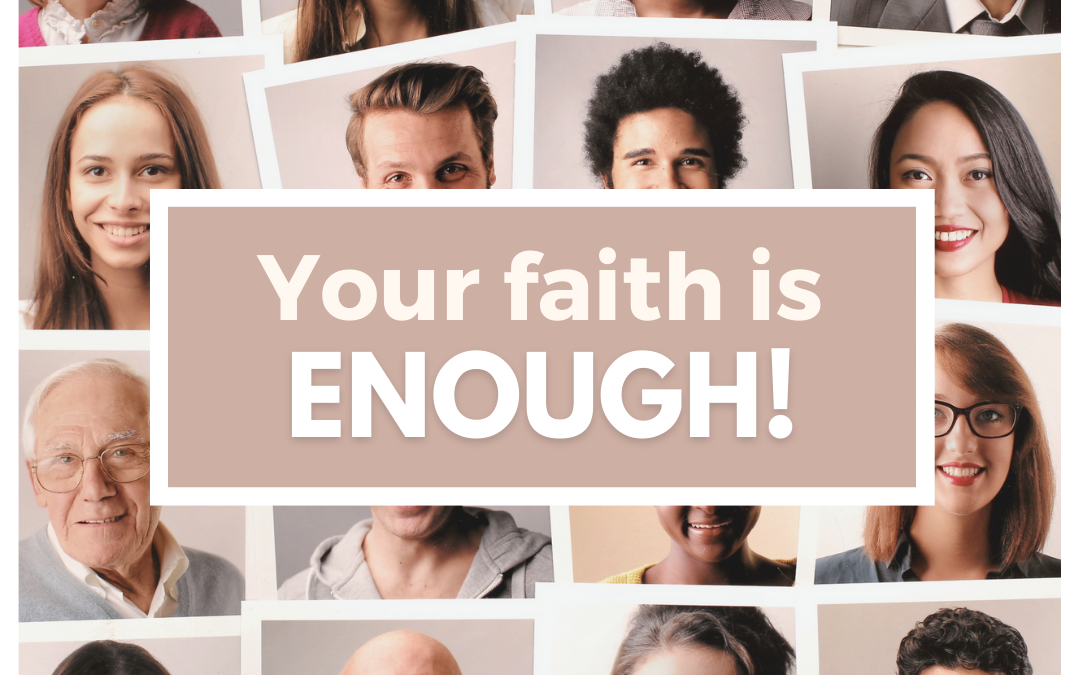 Is my faith enough to stand for the healing or salvation or deliverance of another person? 🤔

It’s often taught that the person we’re praying for also has to be in faith.

If that were the case, that leaves little hope for the mentally incapacitated, children, unborn babies, or unsaved people you simply want to see healed. It also leaves zero hope for raising the dead. 😬

The scripture passage that is always used to back up this statement is when Jesus was in his hometown of Nazareth:

Mark 6:5 – He could do no mighty works there (in Nazareth) except that He laid His hands on a few sick people. And He marvelled because of their unbelief.

This seems to indicate that a person’s unbelief is more powerful than Jesus’ faith to heal.

However, let’s dig deeper into scripture and add some context to this passage.

Everywhere else that Jesus went in His ministry, He healed them ALL:

Matthew 8:6 – Many were brought to him and He healed ALL who were sick

Matthew 12:15 – Great multitudes followed him, and He healed them ALL.

Matthew 14:14 Large crowd came to Jesus and he healed (all) their sick.

Matthew 19:2 – Great multitudes followed Him, and He healed them (all) there.

So why couldn’t Jesus “heal them all” in Nazareth?

The Nazarenes were greatly offended at Jesus, because He was merely the carpenter son of the local family, and who did He think he was, performing miracles and operating in such wisdom? (Mk 6:1-3)

They didn’t believe He was the prophesied Messiah, and were so enraged at his teachings that they even drove him out of the city and attempted to throw him off a cliff! (Lk 4:16-28)

We can come to the conclusion that the reason Jesus could do no mighty works in his hometown was because the people were so offended and full of unbelief that Jesus – that kid from up the road – had any wisdom or power, that they DIDN’T EVEN COME to hear him preach.

The few that DID come, however, got healed (Mk 6:5). If they had all come, they would have all been healed, because Jesus ALWAYS healed them ALL.

Jesus referred to this unfortunate situation in the parable of the Great Supper in Luke 14:16-24 where a man prepared a great feast and invited many, but everyone made excuses as to why they couldn’t come.

In verse 24 Jesus concludes that “None of the men who were invited shall taste my supper.”

They were given the opportunity to come, but they couldn’t be bothered, and they missed out on the feast that had been prepared for them – the feast of healing, deliverance, and salvation.

There are, however, many examples of Jesus and the disciples healing people WITHOUT their permission or even knowledge, because there was a person standing in faith FOR them:

Jesus even healed the demon-possessed son of a man who openly admitted his unbelief (Mk 9:25) because Jesus used his faith.

I can tell you so many testimonies of people who have been saved (wilfully unbelieving atheists/involved in the occult), healed of terminal diseases (and who didn’t even know they were being prayed for) and set free from years of addictions, ungodly lifestyles and other bondages through no cooperation of their own – simply through the faith of ONE PERSON prepared to contend for and break the grip of the devil over them. 🙏🏼🔥

God says, “Will their unbelief make the faithfulness of God ineffective? Certainly not! Let God be true and every man a liar.” (Rom 3:3)

The only time unbelief is a hindrance to faith is when it’s our OWN unbelief. (Mk 11:23) 😬

Unbelief is present when we’re double-minded (we have faith but we’re constantly thinking about the problem/what we can do about it), not bridling our tongue (we have faith but we’re also talking about the problem), or we simply give up because we’re moved by what we see instead of keeping our eyes fixed on what we don’t see (the thing we’re believing for). (Js 1:7, Js 1:26, Heb 10:23, 2 Cor. 4:18)

The disciples couldn’t cast the demon out of the boy because of their unbelief – not the boy’s unbelief and not his father’s – THEIRS. (Matt 17:20).

Part of our great commission from Jesus is to heal the sick, raise the dead, cleanse the lepers and cast out demons – there’s no conditions on this expectation – except that we BELIEVE! (Matt 10:8) 😇

If the person you’re believing for has faith, awesome! If they don’t, we can have faith for them. The prayer of faith (your faith!) will save the sick and the Lord will raise him up. (James 5:15)

One person determined and committed to stand in faith on God’s Word for the salvation/healing/deliverance of someone else is enough to get the job done.

That’s how much God loves His children and wants them saved! ❤️

(P.S. And next time that “kid from up the road” offers us wisdom or prayer, we’d better take it!😜)

Listen to “How To Pray Effectively For Others”, Episode 72 on Faith Talks with Emily Preston podcast,